The first time I saw the Miami Herald’s fabulous offices on Biscayne Bay, I was riding to an appointment with a client who had an interview there. I’d had my nose buried in an early-generation GPS gadget and almost missed it, when the client pointed at the famous location.

“Think that might be it?” he asked, pointing to the massive structure jutting out over the bay. After the interview, as we were leaving, he added, “I bet that’s gone in a few years.” 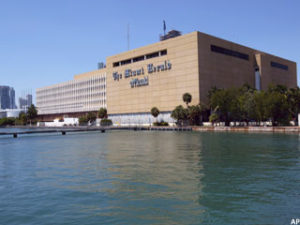 His prediction was right on target: Three years ago, owner McClatchy Company sold the building and moved the journalists to a much smaller location in Doral.

It’s a story that’s being repeated all over the country, as financially strapped newspapers try to raise cash by selling their real estate. The Cleveland Plain Dealer did it. So did The Birmingham News and the Newark Star-Ledger. Tribune Media just told stock analysts it plans to get more aggressive in selling its buildings, including the Tribune Tower in Chicago and Times Mirror Square in Los Angeles.  Digital Media put 51 newspaper offices on the market a couple of years ago.

You get the idea. But why am I bothering you with this stuff? Because it tells us a lot about how to deal with the people who used to work in these places. News releases can be very effective, but we need to understand the other forces at work.

So you’ve sent a press release to a reporter. Here’s what she’s up against. She’s seen half her editors disappear in the past few years – especially the more experienced ones. A while back, somebody told her to empty her desk and take home the pictures of her kids and pups, because she isn’t allowed her own personal desk any more.

So she now reports to an office being rented over a department store out in the suburbs. She carries a laptop in her backpack, and if she’s lucky she may be allowed a locker to keep some files in. She settles at one of the empty, lifeless community work stations and gets a report that her four pieces of content (they rarely talk about stories any more) yesterday didn’t get their quota of clicks. That’s bad news, because she’s now paid based on clicks.

And she’s not even sure she’ll get to stay there long. Some newspapers are suggesting reporters work from a local coffee shop with free Wi-Fi.

Things aren’t much better across town at the local TV station. Local TV stations are still holding their own, but most have only a handful of reporters, and their salaries average about $31,000. They may be on TV every day, but they probably make a fraction of what you do. And like newspaper reporters, they’re being pressured to do several stories a day – and work the social media to generate clicks. If you’re hoping for them to spend the day touring the property you’re selling, you may have a pretty big challenge. The property needs to be convenient to the station, because they can’t devote much time to a story. Your best hope is usually a “one man band” – a camera person without the reporter. That usually works, though. Just do everything you can to keep the journalist’s visit short. If he or she has to wait around, their assignment editor may tell them to move on to the next story.

But things aren’t hopeless. One overlooked opportunity is the local business journal. These remain fairly healthy, because most of them never gave away their news for free. As a result, they still have subscribers helping pay the bills. The staffs aren’t huge, but if you have a good business angle to your story, your chances are pretty good here. Give the news a no-nonsense straight-news angle, and get to the point right away. The business journals usually have a link on their sites that will let you submit your story. Impersonal as this may seem, it tends to increase your chances. But if you happen to know somebody on the staff well enough to send a personal email, by all means do it. But only do it once.

Because with all the changes that media have gone through recent years, one constant remains: Reporters and editors hate being pressured, nagged or threatened. Tell your best story, make it easy for them, and offer it up. Beyond that, it’s in the reporter’s court, and if you press too hard, you may not be welcome next time.

Adapted from article published in Auctioneer, April 2015. Used by permission.