Some of us have been writing and talking about the decline in news media for years, but a lot of people have joined the conversation late. So let’s step back a bit and see the big picture. Our news coverage at all levels is a shadow of its former self. All over the country, we have city councils, county commissions, state agencies, school boards, utilities and even federal agencies operating with no media coverage. When election time rolls around, even the most diligent voters have virtually no information available on which to base their decisions. Our democracy works poorly (and possibly not at all) with a poorly informed citizenry and a less-than-vibrant press.

So who’s to blame? Who broke the news?

We did, when we quit paying the people who produce it

Before 1994 — the year the first browser was invented and the World Wide Web became a “thing” — the news business was fairly simple. We had print media (newspapers and magazines) and broadcast (TV and radio). Advertising paid for most of our news. The price we paid for a newspaper or magazine subscription often didn’t even cover the cost of the paper, but that was OK. All those big ads provided plenty of money to pay the reporters who went around the state or around the world collecting news and reporting it to us each day. Then some media decided to start offering their news free on the Internet. This happened slowly at first, but spread quickly in the late 1990s, and everybody assumed they’d simply sell online ads to remain profitable. As print advertising tanked, online revenues would more than make up the difference. 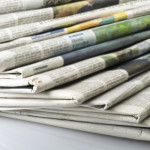 But that didn’t happen. The reasons are complicated, but for now, all that matters is that it didn’t.

So the money wasn’t there to keep paying reporters, most of whom worked for newspapers. The business model was broken, and the media set about looking for something to replace it. They tried selling “apps,” but that didn’t work very well. They’ve tried various schemes for charging us for online news. Pay by the story. Pay by the month. The currently popular version is to offer a half dozen stories free but require a subscription if you go over that. Some of these helped for a while, but this only works if everybody plays. And everybody isn’t playing. If one site asks you to start paying, you can simply move to one of the hundreds of others offering the same content.

The problem is that all these news sites are being fed by about half the reporters we had — or fewer. For a while, there were a lot of organizations tracking the decline in reporting jobs, but most have given up. There were simply too many cutbacks and layoffs to keep track of, and the media were so Orwellian in reporting them that we couldn’t tell what they were saying anyway.  So I’m saying half. It may be worse than that, but I’m pretty certain it isn’t better.

Cable did, when it covered the news, then quit

It started with CNN, which rolled out in 1980. Founder Ted Turner was actually asking for donations, if you can believe that, for a 24/7 cable channel. They hired a lot of talent, put bureaus around the globe and got us in the habit of looking to cable for breaking national news. But that turned out to be expensive, and over time, they started filling the hours with cheaper shows that featured more talking heads rather than reporters out in the field. Bureaus in places like Berlin and Tokyo are expensive, but guys in suits sitting around the studio are much cheaper.  Now, much of CNN’s schedule is padded with features, often-repeated “special reports” drawn heavily from file footage, and various other things that look like news but really aren’t.

The two other major players in the “stuff that looks like news” cable category — MSNBC (on the left) and Fox News (right) — offer just enough original reporting to appear to be news stations, but their primary product now is feeding political controversy.  And like CNN, they offer nothing in the way of state and local coverage.

Social media did, by promoting “viral” content over real news

“Nine things that drive Millennials crazy — (Number 6 blew me away!!!)

Maybe over time, some of these will grow into actual news media. Buzzfeed, for example, is actually hiring real reporters who are doing some original reporting. Only time will tell. For now, the more discouraging trend is that the legacy media (especially newspapers and TV stations) are going in the viral direction, writing for clicks rather than an informed public.

The newspaper companies did, when they failed to adapt

The response of the media companies — especially the big chains — has been to try to cut their way to profitability. Unfortunately, many are still saddled with long-term debt on printing operations that are no longer paying for themselves. Some of these have managed to shed some of this debt through bankruptcy, but this is a band-aid that doesn’t fix the bigger problems. I blamed us for wanting to get our news free, but in our defense, the media companies quit asking us to pay for it, so they share the blame.

Who broke the news? We all did. Now what?