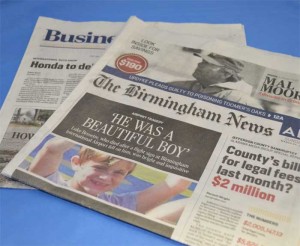 I just read my Sunday Birmingham News, the last remnant of the newspaper I grew up with. The one where I spent the first decade of my career. The one where I learned to write. Advance Publications, which owns the newspaper, also publishes print editions on Wednesday and Friday, but I dropped all but Sunday a while back.

In retrospect, it’s all about habits. Let me explain.

Advance’s logic was sound as far as it went. Keep producing the news daily, but only print it three days a week. Save megabucks on newsprint, ink, trucks, pressmen and such. For a while, I thought the industry would follow their lead, because Advance has a strong history of success.

The problem is that you don’t take a seven-day-a-week habit and break it up — getting the news three days in the driveway and four days a week on the computer or tablet. A lot of people just aren’t wired that way, and from a reader perspective, it makes no sense.

I quickly found that my tablet brought me the news very nicely. It was never wet, and I didn’t get ink on my hands. On Wednesdays, Fridays and Sundays — the three days the physical paper came — it became an inconvenience. My habits had been formed in a different direction. Now I’ve cut back all but Sunday, and it’s hanging by a thread.

It now looks to me like we know the right direction for the newspaper industry. Newspapers that have begun charging readers for the news are stabilizing. We don’t know how the Advance papers are doing, because they’re privately owned and don’t have to publish financial data. The Advance way (primarily relying on cost cuts an online advertising growth) may or may not be working. But the path of charging for the news apparently is turning out to be successful.

Pew’s annual State of the Media report came out a few days ago, and they found that digital pay plans (aka paywalls) are being adopted at 450 of the country’s 1,380 dailies. Along with the return of some classified advertising and an improving economy in general, paywalls seem to be producing good results.  Savvy investors — notably Warren Buffett — are buying newspapers. It’s true that they’re getting them on the bargain counter, but they see opportunity on both the digital and the print side of the business.

The New York Times rolled out a plan last spring that allowed visitors a limited number of stories per month, after which they had to pay. There were a lot of holes in their paywall by design, but now they’ve tightened it up. The Washington Post and San Francisco Examiner have also announced paywalls. Other papers charging for online news include most of the Gannett papers, Lee’s 47 papers, McClatchy’s 30 and E.W. Scripps’ 14.

And why not? If you hired reporters and paid them to do the hard work of interviewing sources, sitting through meetings, going through files and writing stories, wouldn’t you think it was reasonable to be paid for their work? If publishers can’t make enough money to pay the journalists, they’ll have to keep letting them go. There’s still plenty of that happening. Pew estimates that 1,000 newsroom jobs have disappeared each of the last two years, and newsroom employment is down 30% since 2013.

For years, we were in the habit of reading our local paper, and paying for it — although at a price heavily subsidized by advertising. As news began to appear on the Internet, we all expected that online advertising to cover the cost of unlimited online news. For a lot of reasons — not all of which are clear — that hasn’t happened. So now we have to break the habit of having unlimited news from unlimited outlets. Many of us will have to pay  a bit, especially for local news. That seems like a reasonable habit to me.