One of the scariest things I ever saw was Birmingham News city editor Clarke Stallworth behind the horseshoe-shaped city desk. He was a big, loud, white-haired guy who sometimes came back sweaty from a noontime racquetball game. Long before I met him, he was a legend.

I was a rookie, fresh out of college, and impressed with myself. I’d landed the best reporting job in Alabama and wanted to show just how smart I was by writing about big ideas. Concepts. Trends. Issues. Clarke would have none of that.

“You want my attention? Pretend I’m a little old lady and tell me a story.”

I was a slow learner, and stubborn. I kept writing about statistics and notions, and he kept throwing it back in my face. “You give me that shit, I’m off to the funny papers. Try again.” 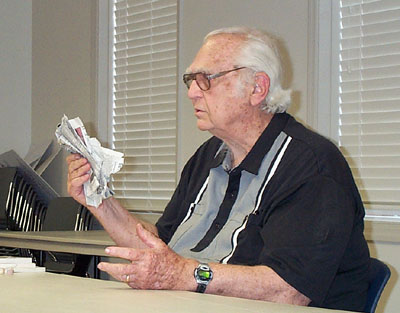 I helped myself to this photo, which I figure I’m entitled to because Clarke Stallworth is doing a “torn & restored newspaper” magic trick I taught him. He got a lot of mileage out of that trick!

Finally, I began to catch on, more out of mortal fear of losing my job than anything else. Clarke quit throwing my stories back at me, and they started getting in the paper. I’d run into people on the street or at church, and they’d say, “I really enjoyed that story about the old lady’s crusade to plant rhododendrons in the Botanical Gardens.” I learned to write stories about grocery bills, con men, blowhard politicians, and fighting preachers.

People noticed. They read. They remembered.

That was more than 40 years ago, and I’m still telling stories. It’s hard work. You have to talk to people in real time. You have to ask questions that others might consider excessive or unnecessary. You have to be a pest. But once you find the story in what you’re selling, all is forgiven. Because stories work.

These days, everybody is obsessed with data. Web metrics. ROI. Engagement. Bounce rates. And we have to pay attention to all of those things, because it’s pointless (and no fun) telling stories to an empty room. Data tells us how many people we reached, how we reached them, and maybe a little bit about how they responded. We need to know that so that we can spend our money more wisely — reaching the right people for the least money.

Put another way, data can tell us how many people are in the room. It can tell us what kind of microphone we have, which way the chairs are faced, and what kind of sound system the room has. But it can’t inspire people or move them to action.

For that, we need stories.

You doubt me? Answer this question: How long has it been since you logged onto Facebook, and what did you “like” when you were there? Odds are, you’ll see that you react most strongly to stories. When you settle in to watch a big football game, what do you see on the pregame? Sure, you’ll hear some stats. But the networks will bombard you with stories about the players and coaches. You’ll see interviews with their mothers, or with the fan who’s made every game for 50 years. The TV networks know that stories will make the game personal for you, so that you stay until the end and pay more attention. Maybe you’ll even sit through the commercials.

Everybody these days is talking about content. What is that, anyway? And who are these influencers we are all chasing? What exactly is engagement? These are great words for impressing clients. But we’re using them for everything now.

A word that can mean anything is worthless. Throw it out. Use real words instead. Tell a story. Sing a song. Show me a picture. Give me something I’ll remember and pass on. Make me want something.

Clarke’s been gone more than eight years now. All through my career, up to the very end, he was the one I’d call when I seemed to be losing my bearings. He never compromised and never changed his tune. When I decided to write this story, I took a walk to think through what I wanted it to say. I thought about what he’d have said if I told him I was working on content for the next issue.

It didn’t take much imagination. I know exactly what he’d have said, but I’m not going to use that language here.