Ever since Facebook rolled out its last set of tweaks in early December, folks have been trying to figure out how those changes affect marketing strategies. This has led to a lot of hand-wringing about how Facebook is trying to force marketers to start spending money on paid ads. 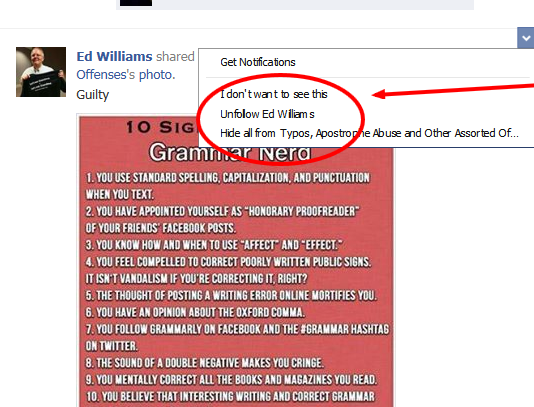 This is an illustration only. It’s actually a post by a good friend and nothing I’d want to hide, but I used it because it might not appeal to non-media geeks.

Get over it. You had a free ride for years, and it was never an entitlement. You didn’t earn it or pay for it, so there’s nothing to be gained from a conversation about how you’ve been done wrong, or what Facebook should have done. Instead, here are some constructive ways to respond – things that will work in pretty much any environment.

Above all, manage your expectations. If you have 700 “friends,” don’t expect your posts to reach 700 people. Don’t buy into the delusion that the world is waiting for your next outburst, bit of feelgood philosophy or strategic insight. There’s no magic. There never was. It’s just that it’s easier to realize that now.