I suggested back in November that the Cable TV industry could be in for some major changes, especially if Disney (which owns ESPN) ever decided to allow the sale of ESPN apart from a cable “bundle.” At the same time — in part to make a point — I “cut the cord” myself, putting digital antennas on my TV sets and getting my programming from Netflix and Amazon. My wife and I found that we could get along just fine without paying $100-plus for 400 cable channels when we watched only a couple.

ESPN, of course, is the big one, and until the last few weeks, it was basically held hostage to the cable companies, who pay more than $6 per month per subscriber to have it in their packages. But it seemed to me — and still does — that such an arrangement was living on borrowed time. (Read the November entry to see why.) 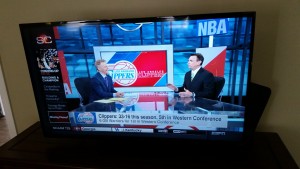 ESPN without cable, running on my 50-inch set

Then it happened. It really happened. At the recent Consumer Electronics Show, a Dish Network subsidiary called SlingTV announced that it would offer a much smaller of 10 or 12 channels — including ESPN, CNN, TNT, TBS and several others — for a flat $20. They’re still in a rollout mode, so it’s by invitation only. (Apparently an invitation isn’t too tough to score though; I got mine over the weekend.) I signed on immediately, and here’s the bottom line: It’s real, and it works.

You can get it through select set-top boxes (I use Roku 3), over the Internet. Unlike other Internet video offerings, this package actually consists of real-time streaming of the various channels. There’s no DVR. You can pause some channels, but it’s pretty much a straight-ahead TV watching experience.

The quality will depend on your Internet connection, just as all Internet content does. But mine’s zipping along just fine with no real hiccups. The picture is smoother than on other Internet apps, including WatchESPN. I had it up and running within five minutes of giving SlingTV my credit card number. It’s a month-to-month deal, so you can turn it on and off as your needs dictate. (For example, if you’re not a basketball fan, you can just turn it off until fall when football returns.)

Kudos to SlingTV not only for being the first to face the reality of cable’s evolution, but also for delivering exactly what it said it would. Their communications has been precise and conservative, without exaggeration.