COLUMBIA CITY, Indiana (January 21, 2015) — Kevin Wendt, a longtime affiliate of Schrader Real Estate and Auction Company, has been elected to the Ohio Auctioneers Hall of Fame. 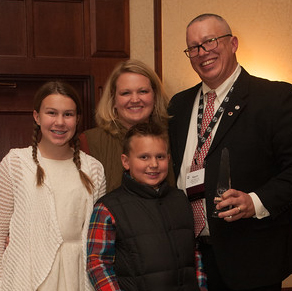 Wendt, of Plain City, was the only auctioneer inducted during the recent convention of the Ohio Auctioneers Association, held in Dublin, Ohio. He is longtime president of The Wendt Group.

Wendt said he was humbled by the recognition. “Certainly was an honor that you never expect, and it’s especially meaningful when you’re elected by your peers. Many in the Hall of Fame are people I’ve worked with or looked up to as role models in the business, so it’s a real honor to join them,” he said.

Andrew White, president of the association, said Wendt drew praise for his years of work and his willingness to help other auctioneers succeed. “I grew up going to Kevin’s sales, and so did a lot of other Ohio auctioneers. It’s astounding when you think of the huge number of auctioneers who are in this business because of him,” said White.

Schrader Real Estate and Auction Company President R.D. Schrader said Wendt has also played an important role in Schrader’s success, especially in Ohio. “Kevin has been a vital team member for many years – someone we can always depend on to get the job done professionally and effectively,” said Schrader.

Schrader Real Estate and Auction Company, based in Columbia City, Ind., is a leading auctioneer of agricultural land throughout the United States and is a four-time USA Today/National Auctioneers Association Auction of the Year Winner, as well as a two-time winner of the Grand Champion Marketing Award of Excellence. Individuals interested in additional information about Schrader’s auctions or services may call 800-451-2709 or visit schraderauction.com.