ROME, Georgia (February 26, 2015) – As William Sherman’s army moved into Floyd County, a lady named Margaretta Skinner kept watch, ready to warn her neighbors when the soldiers approached. But ultimately, her home was one of the few spared, because she had nursed a young Union soldier back to health, and that soldier turned out to be Sherman’s cousin. 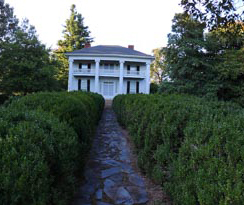 That home – named Margaretta Hall – still stands, and the owner has decided to sell it at auction on Saturday, April 11, with American Auctioneers LLC handling the sale.

The estate today is approximately 37 acres and includes not only the Greek Revival mansion, but also a carriage house and other structures, including a guest house and pool. It is listed on the National Register of Historic Places.

“For more than four decades, this remarkable estate has been owned by the same family, and this is the first time since 1974 that the opportunity has existed for someone else to own it,” said Keith Baldwin, president of the auction company.  “Everywhere you look in this estate, you see not only remarkable beauty, but also the site of a great deal of history, including the basement where Mrs. Skinner cared for Union and Confederate soldiers alike,” he said.

Owner Joanne Dulaney said she hopes the new owner will love it as she has. “This estate has been my world. I’m biased, but to me this is the prettiest place in the whole world. But I’ve reached a point in my life when it’s time to let someone else have it. I need a smaller home,” she said.

The auction will begin at 11 a.m. Saturday, April 11, at the estate, located in the Etowah Valley Historic District, six miles from downtown Rome. Individuals seeking additional information may call 866-789-5169 or visit American-auctioneers.com.

American Auctioneers LLC, headquartered in Centre, Alabama, specializes in use of live and online auctions for the sale of real estate, heavy machinery and other high-value assets.