For the last decade or so, we’ve all felt the pressure write for machines — specifically, for the web-bots and crawlers that Google and the lesser portals send prowling the Internet to catalog our web sites. But here’s the thing: Crawlers and bots can’t read, and they don’t spend money — at least not on anything you sell. Sure, we have to play the game enough to ensure that we’re visible to real people. But if we’ve turned our copy into strung-together lists of search terms, those people will quickly go elsewhere. We’re left wondering how we earned that 99% bounce rate. 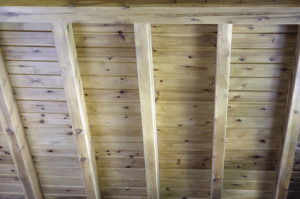 So let’s talk about power writing — for people, not for robots. For people, you start with nouns and verbs, because those are the big guns. All you need for a complete sentence is a noun and a verb. He flew. I ran. They knew. Try that with adverbs.

I know you can’t write a whole web site or newsletter in two-word sentences. But you can tell a much more powerful story if you start with them. What are you selling? An antique sideboard? Nice. But you’ll really get my attention if you tell me it’s a Greene & Greene reproduction made of red oak with ebony plugs and splines, as well as hand-cut dovetails.

Power writing takes work.  You have to ask more questions, but it beats the hell out of breaking out the same old filler words like beautiful, classic, ornate and elegant. Plus, it actually means something.

Let’s say you’re selling a luxury home. Of course it’s beautiful. Gorgeous, even. People with the money to build luxury homes rarely build something ugly (and if they did, and you wouldn’t tell anybody). So “beautiful” says nothing.

It has a big, luxurious kitchen (yawn) with top-of-the-line furnishings? Don’t they all? Tell us about the seven-foot-long island built of walnut, with a two-inch thick rose granite countertop from a quarry in Brazil.

Don’t tell me it’s an open floor plan. Tell me the stovetop faces outward so that I can see across the dining area and through the 14-foot floor-to-ceiling glass doors out onto the travertine patio and the 11,000-foot peak beyond. Or tell me about the flooring made from 2 1/2″ thick heart pine planks that were recovered from an old mill.

If it’s a farm, let me know how many acres are tillable, with what kind of soils. If it’s a commercial tract, don’t just tell me it’s a great location. Get the traffic count and tell me how many blocks it is to the civic center.

Years ago, I had the challenge of writing about a home set up on a hillside in Colorado.  I was sitting in the living room, trying not to doze off, while the seller assured me that “no expense was spared” in construction. Everything was fine, expensive, rare and unique. I was up to my ass in useless adjectives.

I pointed toward the massive beams across the ceiling and said, “Tell me about those. How’d you get them up there?”

“Every one of those is joined using mortise-and-tenon joinery. There’s not a nail or screw in the whole works.”

I perked up. I’m a woodworker in my spare time, and I’ve made a lot of mortise-and-tenon joints. They’re a lot of work, but when properly done, the joint will last forever.

Now, you could argue that he was just being wasteful, but he was after the kind of buyer who’d like to know that sort of thing. It told the story of the home’s quality far better than a generic list of modifiers.

As I recall, we sold the house, too — for a lot of money.

*Adapted and updated from an article originally published in Auctioneer Magazine.

Carl Carter, APR, is a media consultant who has provided public relations, marketing and related services to companies nationwide since 1995. You can reach him at 205-378-9290.