HEBER SPRINGS, Arkansas (June 19, 2015) – Lobo Landing, the famous trout fishing resort on the Little Red River that has attracted sportsmen from all over the United States, will sell at absolute auction Tuesday, July 7, with Wilson Real Estate Auctioneers Inc. marketing the resort and conducting the sale. 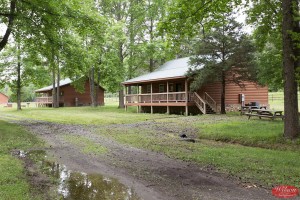 “This is the sort of place to which people return year after year. Many are families from surrounding areas, such as Memphis and Little Rock, but it also draws trout enthusiasts coast to coast. We believe many of those who have rented these cabins will be attracted by the opportunity to own one of them. It has also been a popular retreat for corporations, who have used it regularly to entertain employees, executives and clients. While best known for its world class trout fishing, it’s also popular for canoeing and other outdoor sports,” said Joe Wilson, principal broker and owner of the auction company.

In an absolute auction, the property sells to the highest bidder or bidders, with no minimums or reserves.

The resort is being marketed both as an entirety, to be operated as a business, and in 18 tracts, many tracts consisting of a single furnished cabin and boat slip. Taken as a whole, it has approximately 1,000 feet of frontage on the river, 12 cabins, five vacant lots with boat slips, and the marina/store. The property also includes two bunk houses, a pool, and a new covered boat dock with 24 slips. Bidders may make offers on any tract or combination of tracts.