TULSA, Oklahoma (Oct. 29, 2015) — As a whole, the 440-acre property in Sperry and Owasso known as Bird Creek Ranch might have appealed to a limited number of buyers. But when offered in tracts of 10 to 80 acres, the ranch attracted a crowd of eager bidders and sold for a total of $3,421,600. Schrader Real Estate and Auction Company managed the auction in cooperation with G7 Ranches. 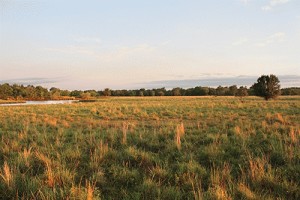 “When you can broaden the market and attract more bidders, you tend to get a higher price, and in this case it exceeded our expectations,” said Brent Wellings, director of Southwest operations for Schrader. Prices per acre ranged from $18,200 on 80 acres to $3,831 on 38 acres, with an average of $7,776.

The auction drew a crowd of approximately 125, including 50 registered bidders. In the end, the 15 tracts went to eight different bidders, most of whom appeared to be local individuals seeking the land for personal estates.

“It’s a common dream to own a little acreage where you can raise some horses and cattle, yet be close enough to the city to commute to work. Being only 10 miles from downtown Tulsa and Owasso, Bird Creek Ranch obviously tapped into that market,” said Wellings. The land consisted primarily of rolling grassland with wooded areas.

“We had a couple of developers who bought some land for their future use, but most of the buyers were local bidders who were seeking 10, 20, 30 or 40 acres where they could enjoy some country living,” said Wellings.

Individuals interested in additional information may visit www.schraderauction.com or call 800-451-2709.

Schrader Real Estate and Auction Company, based in Columbia City, Indiana, is a leading auctioneer of land throughout the United States and is a five-time USA Today/National Auctioneers Auction Marketing Campaign of the Year winner.