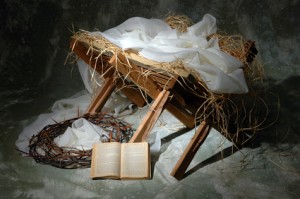 Ever wondered why nearly everybody knows the Christmas story but most of us can’t recall more than half of the 10 Commandments? Why we remember the parables but forget the Epistles?

A major reason is that stories move us and stick with us better. We tell them to our family and friends, and that cements them in our minds. And that’s a great lesson for all of us as we communicate about our products and services. With the exciting (and sometimes puzzling) changes in media technologies these days, we sometimes focus too much on the media and give short shrift to the message.

Let’s face it: the Christmas Story is about as good as it gets. A mother giving birth in a barn and using the cow’s food dish as a crib. Angels singing. Lights in the sky. Oriental kings paying homage, as the local tyrant kills hundreds of babies but misses the right one. I mean, sheesh, if that story doesn’t stick with you, I don’t know what will.

The 10 Commandments and Epistles, by contrast, are information. We don’t remember those unless we work at it. They don’t create pictures in our minds. I spent my first 10 years as a reporter and editor for The Birmingham News, where my first city editor, Clarke Stallworth, hounded me daily about the importance of telling a great story. And he was right. (He was also a great storyteller himself!)

That’s why I always try to find a story in whatever I’m communicating, and why becoming a great storyteller can improve your results as well.

I spend a lot of my time these days promoting upcoming real estate auctions, and those provide some great stories. A farm family selling their property after more than a century because the next generation prefers city life. A home previously owned by a rock star. A piece of ground settled in the early 1600s.

But you can find a story in almost anything if you look hard enough and ask enough questions. Folks love the stories of Steve Jobs, Bill Hewlett and Dave Packard inventing computers in their garages. (What is it about computers and garages, anyway?) In the 1980s, when Jim Koch was launching his new line of beer, he tapped into the legends of Revolutionary firebrand Samuel Adams. But my favorite story — which as far as I knew was never used in the brewery’s marketing materials — was the one of how Koch showed up one day for an elective college course on homebrewing. The instructor asked the students why they had enrolled and practically all of them said it was because the winemaking class was closed. The exception? Koch, who earned some raised eyebrows by saying he wanted to start a brewery.

I can just keep in mind the sarcastic “Yeah, right” comments. (Keep in mind that this was before the explosion in microbreweries. At the time, the choices were pretty much Bud, Miller and Coors.)

Ask questions. Dig a bit. Use your imagination. Tell stories. You’ll get better results. I promise. And if you don’t, I’ll buy you a beer.