In a world where new ways to communicate appear almost daily, it’s easy to get confused about where to spend your time and marketing dollars. Of all the bullets out there, which one is silver? So what if I told you I can answer that very question?

You think I’m lying? I assure you I’m not. I can point you to the only marketing tool that will work for almost anybody. But you won’t like it. 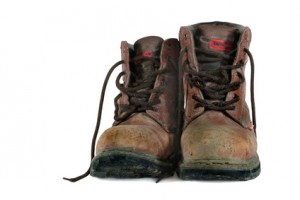 It isn’t Facebook or Twitter. Nor is it Google advertising. Or affinity marketing, or email blasts, or Groupon coupons or any of the other shiny options out there. Even a great website won’t assure you success. Companies die every day even though they’re doing a lot of these things quite well.

Shoe leather. Getting on the phone, making those calls. Getting out and seeing people. (See, I told you you wouldn’t like it.)

If you’re like most of us, you’d rather automate everything. Crank out self-serving tweets and Facebook messages by the dozen. Keep the Constant Contact emails humming. Buy some ads. Put out a press release. Hire and delegate. Then sit back and wait for the magic to happen.

I’ve been watching — and using — media of all types for some 35 years, and I’ve seen a lot of success using everything from newspaper classifieds (though not lately) to radio to television to direct mail to Facebook. But I’ve never found any media strategy that would work by itself. Not even the ones I come up with.

To be sure, media are necessary. They’re tools, and they can be very effective if we use them right. But they can’t do the work without the one constant.

I’ve always known this, but I’ve come to a fresh appreciation of it as I’ve reflected my experiences in serving my biggest market niche: real estate auctioneers. I keep a close eye on the methods used by various companies, and I talk to a lot of auctioneers. I listen to stories. And of course, I’ve learned a great deal over the years from my own clients.

In short, the people — and the companies — that sell the most are the ones that work the hardest. They pour time and money into research about properties before they agree to sell them. They identify prospective buyers long before they start advertising, so the ads are better targeted. They follow up promptly on leads.

When they use Facebook and Twitter, they take the time to do it right. They “waste time” on conversations that don’t lead directly to sales, because they know that it pays off in the long run. (In short, they understand that Social Media are, in fact, social.) They get a feel for the networks by actually spending some time there, so they don’t step on their own feet. Above all, they avoid the temptation to automate their posting, sending out stuff they haven’t even read.

If there were any magic, I’m pretty sure I’d have found it by now.

And I have. Talking to people — whether face to face, on the phone, on email, or through Social Media. It’s the best way I know to work some magic of your own.