I’ve been saying for years that the rules of Social Media are pretty much the same as those in the rest of life: If you talk nonstop about yourself, or about stuff that doesn’t interest people, they quit listening.

We’ve been seeing this with brand pages on Facebook (aka “fan pages”) for a while now. AdAgeDigital reported recently that engagement on Facebook walls of brands is down 22%. AdAge said many companies brought the decline on themselves by “dissing audiences with bad content, coupons, polls, contests and boring filler.”

It’s bad enough if people just begin to zip past your posts in their Facebook timeline. But Facebook and some third-party applications have added tools that make it easier to hide you completely. And you can be totally unaware that it’s even happening. 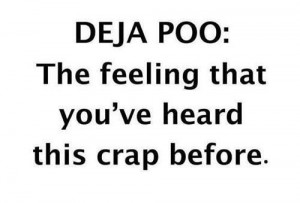 Here are a few ways to get people to hide your posts so they don’t see them any more:

Bang the drum constantly on one topic. If you talk only about one topic and that topic doesn’t interest people, they’re more likely to hide you completely. Remember that people like to talk about a variety of things. Even if somebody loves God, or the Democratic Party, or lost puppies as much as you do, a constant stream of posts and photos on one topic will turn them off.

Try to get more attention by posting pictures that are nothing but words. Sometime about a year ago, folks decided more people would notice a picture more than they would a simple status update. For example, instead of simply posting the text, one of my (now hidden) Facebook friends uploaded the “deja poo” image at right. Since this guy does this all the time, I finally just hid him completely.

Let your apps take over. Nobody really wants to know if you’re the new Mayor of Pete’s Pub. (Congrats. So you have more time to sit around drinking than those of us with more productive lives.) Or if you need a gizmo for your farm, or if you scored a 50-point word in Words with Friends.  If you keep letting apps spam Facebook like that, users will either block the app (I’ve blocked most of them in my feed) or just unsubscribe from your posts completely. 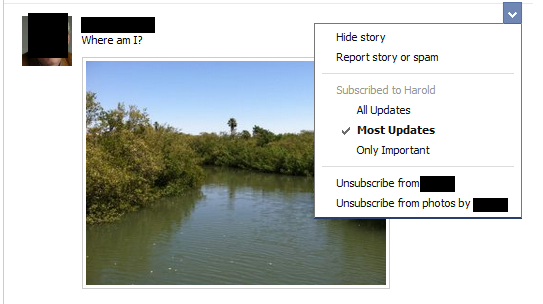 Want to clean up your own feed?

Assuming you’ve cut out some of your own bad habits, you may want to get rid of some of the clutter in your own feed. Here are a couple of things you can do. On anything you see on your screen, look for a little arrow just to the upper right. If you see one, click it. Depending on what kind of post it is, you may be able to simply hide everything like it.

If you’re getting tired of all those attention-seeking “word pictures,” you can get rid of those too. Note that you can unsubscribe from a person’s pictures without hiding his or her other posts. (This doesn’t work for “shared” photos.)

Here’s one more way to clean up your feed: Block those apps that are driving you crazy. Just look in the upper right part of your Facebook page for the “Home” button, click the “down” arrow next to it, and click the “Manage Blocking” button near the end of the page. You’ll be able to figure it out from there.