It’s time to lay off the photo filters. 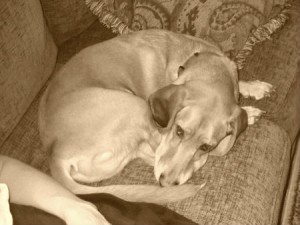 My hound, Jack, has beautiful coloring. So why would I mess with it like I did with this filter?

Seriously. Just say no. Maybe it’s because I grew up in the photofinishing business, where everybody went to great lengths to produce pictures that faithfully represented reality. Maybe it’s because I’m color blind, or because I’m just old-fashioned. But whatever the reason, I’ve hit my saturation point with pointless sepia tones, fake embossing, drop shadows, torn edges and other “enhancements.”

Most of the enhancements I see these days look like the heat damage we used to get when somebody left their film in the car on a hot July day. Or when they found a roll they’d left in a camera five years ago and sent it in for processing. In those days, our term for it was “stupid photography,” not filtering.

We seem to hit one of these fads every year or so. In the 1990s, “Shockwave” (a predecessor to Flash) appeared and made it easy to put animated images on web sites, and suddenly we all thought we had to do it. Later, we saw Flash all over the place. Then Apple had a lover’s spat with Adobe (which makes Flash), and decided not to allow it on the iPad. Now the world’s beating a path to the doorway trying to get rid of it. Every time a new version of PowerPoint comes out, we get a new set of wipes, dissolves and other transitions, and everybody who gives a presentation seems to feel a need to use them all.

These days, the obsession with photo filters seems to be driven by Instagram, a social media service that makes it easy to color everything yellow (or gray, or blue, or …) and upload it for use on Facebook, Twitter and other social sites. There’s nothing wrong with the service itself, and I use it now and then. Just get over the compulsion to mess with the photos.

Take good pictures. If the color is a little off, use Photoshop or some other tool to tweak them. But if you have to “enhance” every photo you take, you need to either get a better camera or get better at using it. Or maybe take pictures of prettier things.

If everything’s “special,” nothing is.

The wrong question to ask: “Why not?”

The right question: “Why the hell would I?”