“I guess it’s fair to say this was the biggest management challenge of my life, especially with the high expectations for the sale of the world famous Ron Pratte collection of classic vehicles. But we pulled it off, and it’s good to be back home, working to help people in Texas get their land and other assets sold,” said Assiter, founder and chairman of Assiter Auctioneers. 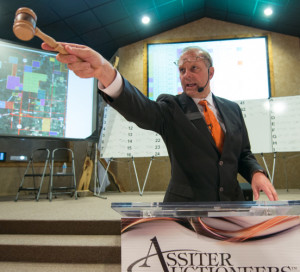 The Ron Pratte collection alone brought more than $40.44 million. But pulling off an auction on that scale required an unprecedented effort for Assiter.

In Scottsdale, the task required the efforts of 57 auctioneers from 15 states. Of those, seven have won international competitions, and 12 are state champions. Five are current board members of the National Auctioneers Association.

“Everybody has a defined role. Some are calling the bids. Others are either introducing the vehicles being sold or working as bidder assistants – communicating on the auction floor with the bidders, answering their questions, and relaying their bids to the platform. There are thousands of small details and tasks, most of which people never see on television,” said Assiter.

John Nicholls, who won the International Auctioneer Champion competition in 2006, has been working the Barrett-Jackson auctions for 11 years. The Virginia auctioneer – president of the Nicholls Auction Group in Fredericksburg, Va. – has watched the event grow year after year.

“The ability to attract this dream team of auction professionals reflects the respect others have for both Spanky and the event, and participation has become something of a status symbol among auctioneers. It isn’t easy to get people of this caliber to commit to three, five, seven or nine days of work, because they all have their own businesses to run back home, but we all consider it a privilege,” said Nicholls.

Back in Texas, Assiter is now immersed in the work of preparing for upcoming auctions, including the March 5 Canyon Heavy Equipment Auction. “Selling tractors, backhoes, pickup trucks and other machinery may not have the glamour of a 1966 Shelby Cobra 427 Super Snake (which sold for $5.1 million), but it has also grown to play an important role in the Texas economy as the go-to way to buy and sell machinery in this area. So we’re busy taking consignments now for that event,” he said.

Individuals interested in additional information may visit www.assiter.com or call 806-655-3900.